About 60,000 African migrants have arrived in Israel since 2006, fleeing unrest in their home countries. But upon arrival in the ostensibly democratic country, the migrants have faced intense persecution and have been branded as "infiltrators" by right-wing politicians and activists.
We speak with film maker David Sheen about his new film Israel's New Racism: The Persecution of African Migrants in the Holy Land

Listen to the interview here

Meron Estefanos is an Eritrean journalist and human rights activist. She is a contributor to the leading Eritrean diaspora news site Asmarino and a presenter for Radio Erena. Estefanos is the co-founder of the International Commission on Eritrean Refugees, an advocacy organization for the rights of Eritrean refugees, victims of trafficking, and victims of torture. She actively campaigns for freedom and democracy in her country, which has suffered under the dictatorship of Isaias Afwerki since 1993.

Meron has set up a PayPal account to collect donations to help the families of Eritrean hostages in Sinai. To donate, go to PayPal.com and transfer to the account soscare@yahoo.com. Note that the account is not set up as an official charity.

Listen to the interview here
Posted by African Perspectives at 2:57 PM No comments:

Interview with Serge Ndayizeye, one of the organizers of the protest against the presence of President of Rwanda Paul Kagame at the Rwanda Day festivities held on September 28th, Toronto, Canada.

Posted by African Perspectives at 8:26 PM No comments: 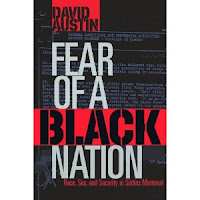 Earlier this month author David Austin was in town to promote his newest book Fear of a Black Nation: Race, Sex, and Security in Sixties Montreal. It is available in bookstores!

Posted by African Perspectives at 6:57 PM No comments:

Africom Declaration and "Made in Congo" Sabrina Moella

In this edition of African Perspectives (May 26, 2013), we first speak with Aziz Fall, an organizer with the Group for Research and Initiative for the Liberation of Africa (GRILA) in Montreal.  He speaks about an international declaration that was released by an international coalition of organization and individuals condemning AFRICOM.  We then speak with Sabrina Moella regarding her new one-woman play called "Made in Congo".  We start, as always, with news briefs and headlines from the continent.

Listen to the show here

For the AFRICOM Go Home! declaration (in 6 languages), visit the GRILA website

Posted by African Perspectives at 8:08 AM No comments:

In commemoration of the 50th anniversary of the creation of the Organization for African Unity and African Liberation Day, GRILA-Toronto hosted a panel discussion at A Different Booklist. Panelists:
Prof. Pablo Idahosa: Resources and Land Grabbing on the African continent
Ameth Lo: AFRICOM, the New Wave of Militarization in Africa.

Listen to the panel presentation here

Visit GRILAs website to access the Declaration on AFRICOM in 6 language
Posted by African Perspectives at 2:01 PM No comments:

Report Back from Cabral Workshop

In this episode, Ameth speaks to organizers of a public workshop held in honour and memory of Amilcar Cabral.

Listen to the show here
Posted by African Perspectives at 7:35 AM No comments: